Welcome to our new website! Tourism Best Practices is now at TourismBestPractices.ca.

The Gros Morne Institute for Sustainable Tourism (GMIST) and its partners, Parks Canada, the Atlantic Canada Opportunities Agency and The Gros Morne Cooperating Association are proud to announce that GMIST has been awarded the 2013 National Leadership Award from the Responsible Travel and Tourism Forum (RTTF).  The Responsible Travel & Tourism Forum Leadership Award recognizes a Canadian organization that has demonstrated a commitment to socially, economically, and environmentally responsible practices within the tourism industry.  RTTF applauds GMIST for its excellence in supporting the Atlantic Canada Tourism Industry through its industry relevant training programs, and for demonstrating a collaborative model for destination development in the Gros Morne region of Newfoundland and Labrador.

Founded in 2003, the Gros Morne Institute for Sustainable Tourism (GMIST) is a not-for-profit agency based in Rocky Harbour, Newfoundland and Labrador, that advances the quality and success of Atlantic Canadian tourism operators through an array of training programs developed and offered at the Institute.

“This award is really a testament to the incredibly hard work that the staff of GMIST, Parks Canada, the Atlantic Canada Opportunities Agency and the Gros Morne Cooperating Association have invested in assisting tourism operators in Atlantic Canada succeed in a globally competitive tourism industry.  Most importantly, I believe that what makes GMIST so special is the relationship that exists with Parks Canada and the ability to use Gros Morne National Park as a living classroom showing tourism operators from across Canada how to engage visitors in meaningful ways to not only improve their own businesses but also the overall products and experiences of their regions, provinces and Canada!”  Jonathan Foster, Executive Director, GMIST.

Pictured right, from the awards ceremony at the Delta Chelsea in Toronto, Ontario, are from left to right Ms. Myrka 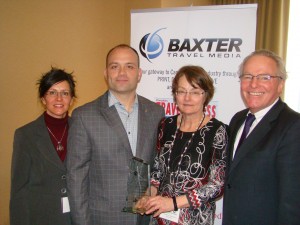